June 12, 2012 – Humax announced its plan to participate in the ‘ANGA Show 2012′, European trade fair for cable, broadband and satellite, which takes place in Cologne, Germany for 3 days from 12 June, 2012 and to reveal its newly announced next generation set-top box, Home Media ServerSmart Box and Smart Box to dominate the European market in advance.

The HMS(Home Media Server), demonstrated by Humax this time, is embedded with 4 tuners and transcoding technology to provide the N-screen service, which allows users to transmit and share real-time broadcasting contents for TV in each room and various devices such as smart phone, tablet, PC, etc. at home. Also, users can enjoy various IP based service such as video on demand (VOD) and catch-up service for major broadcasters’ contents, YouTube, SNS, game, etc.

Especially, this product is meaningful since it leads the early stage of Home Media Server market by implementing those functions that had been discussed just conceptually. Humax has a plan to unveil this product for the first time in German retail market at the end of this year and expand its distribution to other European market.

At the same time, Humax will demonstrate its ‘Smart Box’, which has been getting attention in recent, to launch in European market. The smart box provides various contents service based on IP. This product has adopted the most up-to-date Android Ice Cream Sandwich version and provides dozens of Apps including various movie services such as VOD, catch-up, YouTube, game, Facebook, and so on. This product will be released sequentially in Australia, Middle East, and Europe at the end of this year. 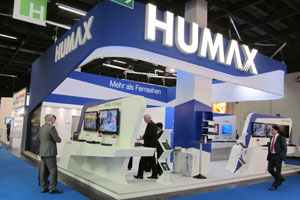 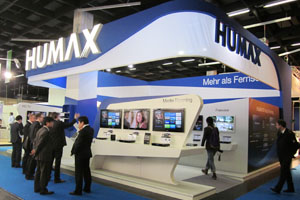 Byun Dae-gyu, President and CEO, said “Since broadcasting combined with IP, consumers has needed more various contents and convenient UI(user interface). HMS is expected to be a new growth engine for set-top box market. Humax will enhance its competitive market power in Europe by announcing new product one step ahead.”

Meanwhile, the ‘ANGA Show 2012’ which is an European trade fair for cable, broadband and satellite will take place for 3 days from 12 June, 2012 in Cologne, Germany. More than 420 companies from 37 countries will take part in the Show this year. About 16,500 visitors visited last year. The exhibition stand for HUMAX is located at G9 in 10.2 hall.
[Note] Terminologies
(1) HMS: Home Media Server
Refers to a main server embedded with multiple tuners and hard disk(s) in a living room. It transmits and shares the TV contents in each room and supports streaming service for various IP devices such as tablet, PC, smart phone, etc.

(2) Transcoding
Refers to a function to make various video codecs to be displayed in any device such as TV, tablet, smart phone, etc.