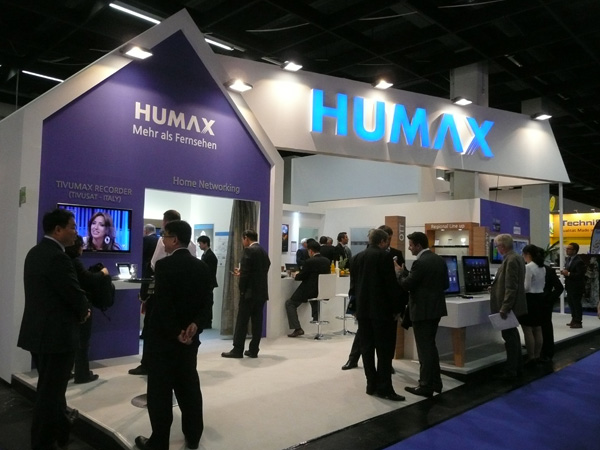 Humax will demonstrate a process of multimedia content (real-time broadcasts, video, music, and images) being shared among the devices (HGS, RG, Smart Box, and Tablet PC) on its home networking service. This service allows you to receive 3 channels simultaneously, record 4 channels, and download a broadcast in real time to 2 connected devices other than TV. Especially highlighted will be HGS, which doubles both as set-top box for broadcasting and RG for communications and supports the Triple Play Service (broadcasting, wired/wireless Internet, and VoIP) in a single set-top box.
The RG supports wired/wireless Internet and VoIP based on DOCSIS 3.0 and EuroDOCSIS 3.0. Notably, the wireless Internet supports stable video streaming on the 5GHz frequency dual band, which has little interference with 2.4GHz frequency.

This trade show is meaningful for Humax in that it will give Humax an opportunity to secure the latest communications technologies such as RG, enabling the company to go after the broadcasting and communications convergence market more aggressively.

At the start of 2013, Humax started supplying Home Gateway Servers for satellites in North America, and is planning to advance into the retail markets in Germany and Australia this year, and provide cable broadcasting devices in South America early next year. We are currently under consultation with other businesses to supply the RG before the end of this year.

“The increase in connected devices such as smartphones and tablet PCs has accelerated the convergence of broadcasting and communications. Humax has committed itself to securing communications technologies in recent years, and will launch next-generation products converging related technologies this year and next year,” said President Byun Dae-gyu, adding “The broadcasting and communications convergence market will give Humax another opportunity to grow.”
In the meantime, ANGACOM 2013 will be held in Cologne, Germany for three days from June 4th through June 6th. Over 450 companies from 36 countries are expected to participate in the event this year. An estimated 16,000 visitors came to see the event last year. The exhibition booth for Humax is located at G9 in 10.2 hall.